The latest from STOKE HILL PRESS ...

THIS SECOND VOLUME OF Geoff Armstrong’s history of the first 100 years of Dragons rugby league commences in the SCG dressing-room in 1967, after St George’s epic 11-year winning run ended with a dramatic loss to Canterbury. By the late ’60s, Saints’ famous white-with-a-Red V jersey was known across the land and their esteemed secretary, Frank Facer, proclaimed that St George’s fanbase extended ‘worldwide’.

Not even Facer, visionary that he was, could have foreseen the tumultuous times ahead for rugby league and his beloved club. As with Volume 1, this story features a heady mix of footballers great, loyal and brave, such as Johnny Raper, Graeme Langlands, Billy Smith, Ted Goodwin, Craig Young, Rod Reddy, Brad Mackay, Mark Coyne, Mark Gasnier and Ben Creagh. There are grand final triumphs and disappointments. And there is much controversy, most notably during the Super League war of 1995 to 1997. In the aftermath, St George and the Illawarra Steelers established the code’s first joint venture: the St George Illawarra Dragons.

The rugby league district represented by the Red V has changed greatly in the last 100 years, but its spirit remains strong. Dragons fans are, to quote champion coach Wayne Bennett, still ‘everywhere’. In 2010, premiership-winning captain Ben Hornby called them the ‘true believers’. This book, which features some magnificent photographs — including some from the 1977 and 1979 grand finals that have never been seen before —  is for them.
PURCHASE 'SPIRIT OF THE RED V (VOLUME 2: 1968–2021)' HERE 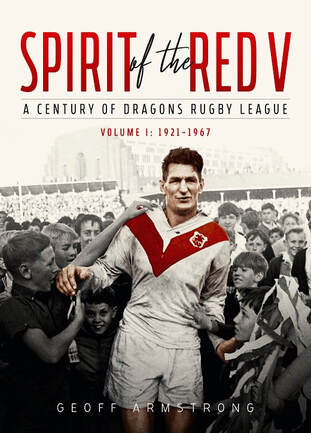 ​ON 23 APRIL 1921, the St George rugby league club made their premiership debut. They were, said the papers of the day, the ‘pride of the Illawarra district’.

Over the next 100 years, the mighty Dragons built a record of excellence unmatched in league history. St George were perennial finalists from the 1920s to the ’80s. They won 11 straight grand finals from 1956 to 1966.

The Red V jersey is one of Australian sport’s most iconic symbols of excellence. It is known across the world. No team has more passionate fans. Five League Immortals — Frank Burge, Norm Provan, Reg Gasnier, Johnny Raper and Graeme Langlands — played for the club.
​
THIS CENTENARY HISTORY OF the St George rugby league club was not meant to be two volumes. However, as author Geoff Armstrong, the publisher at Stoke Hill Press and a diehard Dragons fan, delved ever deeper into the club’s unique story, he realised that a definitive account of the club’s first 100 years requires ‘extra time’. So many champions have worn the Red V. Famous matches and fierce controversies abound. It is important that those who ‘dug the well’ are not forgotten.

‘The success of various Dragons line-ups over the years has a common thread,’ Armstrong says. ‘It was built on a strong junior league, teamwork, great discipline and supreme fitness. Their great captain-coach Ken Kearney reckoned Saints had “the best spirit in the comp”. The results proved him right.’

In part, this book is about setting the record straight. Why did it take the NSW Rugby League 13 years to accept St George into its competition? Did the League bring in the four-tackle rule in 1967 just to stop the Dragons’ incredible winning streak? Why is Frank Burge, who played just a solitary season in the red and white, such a giant figure in the Dragons’ story? Was the 1963 Grand Final fixed? Is it true the club was originally reluctant to wear its now revered Red V jersey? How crucial was the ‘Taj Mahal’ (St George Leagues Club) to the team’s success? Did Saints prop Bill McRitchie really have his ear bitten off by a high-profile policeman in a game in 1945? The League’s attempts to cover up this atrocity were shameful.

In contrast, the story of Lieutenant Gordon Hart’s midnight train ride from his commando base in country Victoria to reach the SCG in time for the 1941 final is the stuff of legend. Hart was man of the match as the Dragons won their first premiership. Quickly, he was back on the overnight train to return to camp on time.

Gordon Hart was a local junior, one of many. For years, the working-class and middle-class suburbs of the St George district formed a perfect football nursery. The parklands in winter were dotted with goalposts. Today, the club’s territory has expanded but the Spirit of the Red V proudly lives on in the St George Illawarra Dragons. The fans’ love for the Red V, its history and all it represents has not changed, and the lessons of a glorious past offer hope for a prosperous future.
PURCHASE SPIRIT OF THE RED V (VOLUME 1: 1921–1967) HERE ...