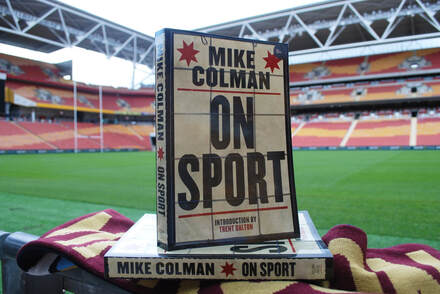 MIKE COLMAN IS ONE of Australia’s best storytellers and most respected sports writers. He is a Walkley Award-winning journalist and author who has covered major sporting events across Australia and internationally, including seven Olympics, six Commonwealth Games, four Rugby World Cups and many Ashes, State of Origin and Bledisloe Cup series.

Mike Colman On Sport is, in the words of best-selling author Trent Dalton, a ‘soaring collection’ of Mike’s finest ‘longform’ work.

The book covers a broad range of sports, from the football codes and cricket to billiards and indigenous marathon running. The chapters on State of Origin rugby league are a feature, which is not surprising given Mike’s back story: as a reporter working in Sydney and then Brisbane, he has lived both sides of the rivalry. This rare perspective shines through in his tale of the very first Origin (played in 1945) and in chapters on Darren Lockyer, the men who have played just one Origin game and the history of the iconic ‘Queenslander!’ chant.

These stories sit alongside revealing profiles of some of Australia’s greatest sporting heroes, such as Makybe Diva, Jason Day, Anna Meares and Cate Campbell. Four Olympic silver medallists explain why their medals were as good as gold. The chapter on former Wallabies coach Robbie Deans reminds us that we shouldn’t judge current Wallabies coach Dave Rennie on a couple of games. Mike’s award-winning writing from the Rio Olympics, when he describes the feats of Kyle Chalmers, Usain Bolt and Neymar, is superb. His tributes to two giants of Australian sports journalism, Richie Benaud and Mike Gibson, might be even better.

This is one of those books where if you ask ten different people for their favourite chapter, you’ll get ten different responses. As you read each story, it’s hard not to think: How does Colman do it?

Another feature of the book is Trent Dalton’s introduction, which captures Mike’s passion for longform sports writing. Trent’s admiration for Mike’s work goes back to the days when they shared a desk at the Courier-Mail. He has written one of the all-time great book intros.

Longform sports journalism might be a writing style from another era, but with all the chapters self-contained and Mike’s love of sport shining through, this is unquestionably a sports book for today.
purchase mike colman on sport (customers in australia)
PURCHASE MIKE COLMAN ON SPORT (CUSTOMERS OUTSIDE AUSTRALIA)