TOUCHSTONES
RUGBY LEAGUE, ROCK’N’ROLL, THE ROAD AND ME
​By Steve Mascord

‘Mascord’s memoir is like an eccentric Aussie version of Fever Pitch ...’ 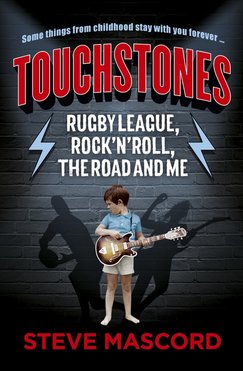 OF ALL THE BOOKS I have worked on, over 30 years and including titles by high-profile figures such as Steve Waugh, Peter Brock and Wayne Bennett, I’ve never had a more universally positive reaction to a book as I have received for Touchstones.

In one private email sent to me by a friend whose judgment I respect, Steve Mascord’s debut book was compared to ‘Norman Mailer at his chaotic best in Advertisements for Myself’. Another correspondent wrote, ‘I haven’t enjoyed a book opening so much since Catcher in the Rye or Hornby’s High Fidelity.’

It really is that good. The public reaction to the book has been similarly upbeat. When Russell Crowe received his copy, he tweeted, ‘The Opus has arrived.’ Here are some of the comments made about Steve Mascord and Touchstones, in reviews published and interviews conducted since the book’s release ...

‘Word of mouth is a very powerful tool, and I hear Touchstones is an absolute beauty.’
— James Bracey, Channel Nine

‘Mascord has given rugby league far more than he ever took from it: a moral conscience when administrators have struggled to differentiate right from wrong; a conduit for new ideas; a hunter of truths at a time when journalists have become almost impotent against the NRL PR machine.
‘If you’re ever tempted to think he’s lived a blessed life, just pick up a copy of his book and thumb through the personal revelations in the opening pages.’
— Robert Burgin, theroar.com.au

‘This is extraordinary … there are not many books that have any of the stuff that Mascord has done.’
— Shannon Byrne, ABC Grandstand

‘No one defines “rugby league trainspotter” — as in more than a bit mad, but in a good way — better than Steve Mascord. He writes beautifully …’
— Peter FitzSimons, Sydney Morning Herald

‘A wonderful story … featuring the most unbelievable opening line ever in a book.’
— Dan Ginnane, Triple M

‘Touchstones is a manic read. You feel like a pinball, bouncing in all directions as Mascord goes on tangents as he attempts to fulfil his goal of attending a rugby league match and a music gig — usually heavy metal — every week for 52 weeks. Highly recommended.’
— Greg Growden, ESPN

‘To borrow a famous rock’n’roll quote, it has indeed been a long strange trip for the famous rugby league and rock writer Steve Mascord. His quest for his true self is now all laid out in his new book, Touchstones ... ‘This is a terrific book, so readable, really fabulous and highly recommended. It’s all you’d expect from Steve: big heart, big hits, big sounds. Get into it!’
— Wendy Harmer, ABC702 Mornings

‘Touchstones is beautifully crafted. Steve is an amazing writer. You’ll never read a better first line of a book in your life.’
— Ben Ikin, NRL360

‘The best book out at the moment.’
— Matthew Johns, Triple M Grill Team

‘A remarkable book that has been likened to Fever Pitch, that great book by Nick Hornby. It has to be one of the best sporting books published in Australia this year.’
— Paul Kennedy, ABC News Breakfast

‘We get a lot of sports books at work. Some are still sitting there. Touchstones was stolen within 24 hours.’
— Terry Kennedy, Big Sports Breakfast

‘Steve, I congratulate you on having the courage to be vulnerable, because I know that’s what you’ve been throughout the process of writing this book.’
— Mary Konstantopoulos, Ladies Who League podcast

‘Mascord may not be Herodotus but neither does he claim to be. What he has written is an enormously entertaining and enlightening book, which will immerse every rugby league tragic and cause every rock’n’roll devotee to question what is in the personal memory vault ...
‘Touchstones is a clear milestone in Steve Mascord’s life to date. Our pilgrim moves resolutely across the landscape, meeting an impressive range of characters and, alternatively, surviving or enjoying his experiences.’
— Stephen Loosley, The Spectator

‘It’s not a rugby league book … it’s really a book about life in general. And what an extraordinary life Steve’s had!’
— John McCoy, RadioTAB breakfast

‘Steve Mascord is a gifted observer of life. His book, Touchstones, is a compelling brew of league, music and identity.’
— Peter Newlinds, Tasmanian-based author and commentator

‘The book gets you in from line one … fans are going to find this book fascinating.’
— Brett Papworth and Graeme Hughes, 2SM Talkin’ Sport

‘In this extraordinary memoir, Mascord looks back and asks himself the question: what the hell have I done with my life? It is a fascinating book.’
— Rod Quinn, ABC Overnights

‘It’s a book that crosses not only international boundaries, but also emotional boundaries. From Windang, just south of Wollongong, to the world of metal and rock to a period of self-discovery, Mascord has been to a lot of places around the world. This book takes us to him.
— Mick Radojkovic, 2SER107.3

‘Touchstones is a great book. It struck a chord … it’s a book about finding yourself living your dream but then questioning if you’ve lost the idealism, romanticism and sentimentality that your first felt when you set out on your journey … It’s not a biography, but it captures the essence of a man better than most biographies. It’s a beautiful tale of a good bloke who is authentic, passionate and who, like all of us, is trying to make sense of the different threads that run through our lives.’
— Paul Ritchie, journalist and one-time prime ministerial speech writer

‘In his new book, Touchstones, author Steve Mascord reviews his life through a series of “war stories”, centred around his two obsessions: rugby league and rock’n’roll. From being “conceived in an insane asylum” (revealed in the opening line of the book) to global gallivants, from frosty footy games in Canberra to an AC/DC concert in Manchester (in the very same week), Mascord documents 52 weeks of games and gigs, alongside stories of Marty Bella, Bret Michaels and his own, often turbulent, life.’
— Rolling Stone

‘What started out as a book chronicling the movements of the world’s most-travelled rugby league and rock’n’roll reporter, turns out to be an astonishing journey of self-discovery.’
— South Sydney Rabbitohs website

‘Mascord is the most genuine man in football. He marches to the beat of his own drum.’
— Nick Tedeschi, The Guardian

‘It’s not at all what you’d expect from a rugby league book. We can’t recommended it highly enough. It’s a really fantastic read.’
— The Rugby League Digest

‘In Touchstones Mascord churns out more juicy anecdotes than a convention of liars … he writes in the best tradition of memoir, honestly laying out what he thinks in order to better understand it … At the heart of this surprisingly affecting book is Mascord’s discovery in middle age of the identity of his birth mother and the name she had given him before he was sent to live with the couple who would become his adoptive parents.’
— Greg Truman, The Weekend Australian Review