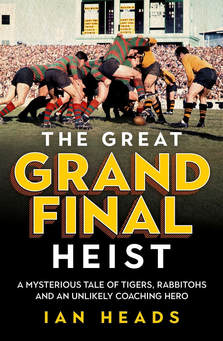 Ian Heads’ The Great Grand Final Heist is a classic underdog tale that reads like a thriller. There has never been a rugby league book like it ...

Some grand finals fade into history, but not 1969. Balmain versus South Sydney. Tigers against Rabbitohs. Two famous clubs with an intense rivalry that went back to league’s earliest days. ​Souths were hot favourites, a team full of internationals such as John Sattler, Ron Coote and Bob McCarthy. Balmain were missing some of their biggest stars, including ‘Big Artie’ Beetson, who’d been sent off after being provoked in the major semi-final, and Dennis Tutty, who sat out the season over a contract dispute. But they were still full of character and characters.

Nosworthy was a Balmain junior who’d completed his football education in western NSW. He is the hero of a unique football tale that contains more sub-plots than a Raymond Chandler whodunit. Why, on grand final day, did the Tigers’ players ‘flop down’ injured? Many Souths fans still believe they were cheated. Some looked suspiciously at referee Keith Page, whose name went hand-in-hand with controversy. Others wondered if Sydney’s big gamblers had organised a fix?

There were laughs too. Just before kickoff, Balmain boss Kevin Humphreys made his injured centre Hal Browne don a Tigers outfit and lead the team out onto the SCG, as the club mascot. Browne ran straight to one of his best mates, Souths halfback Bobby Grant, with whom he’d played junior footy. Grant, unaware of the identity of the mascot, threatened to flatten him …

In 1969, Ian Heads was the Daily Telegraph’s chief rugby league writer. In 2017, he was described as ‘the most respected league journalist there has ever been’. In The Great Grand Final Heist, he explores every angle of a remarkable sporting story, combing the archives, scrutinising film and interviewing players, fans, officials, reporters and punters. In doing so, he encounters pride, tragedy, humour and regret, solves the enduring mysteries that have surrounded this famous match, and painstakingly and superbly brings a fondly remembered league era back to life.

Heads also takes time to ponder the harsh reality faced by some football heroes of the ’60s and ’70s: are their current health struggles linked to the concussions they suffered during their careers?

Yes, they were the ‘good old days’. But they weren’t perfect.

The Great Grand Final Heist is available in Australia via this website and wherever good books are sold.​
buy the great grand final heist 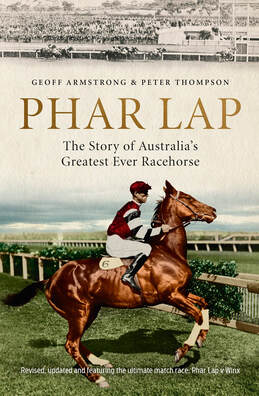 Every champion Australian racehorse since 1930 — from Bernborough and Tulloch to Black Caviar and Winx — has been called ‘the best since the Phar Lap’.

So, in all likelihood, will the next record breaker, because Phar Lap captured the imagination of the sporting public like no other thoroughbred ever has or ever will. In part, this was because of his remarkable back story, which unfolded during the Great Depression and featured a battling trainer named Harry Telford and a knockabout young strapper, Tommy Woodcock, who built a relationship with Phar Lap that was second to none. It was also because of the mysteries that surrounded the wonder horse.

Did gangsters really try to shoot him on the eve of the Melbourne Cup? Who or what killed Phar Lap?

As Winx was winning 33 races straight from 2015 to 2019, one question kept recurring: ‘Could she have beaten Phar Lap?’ The great mare was phenomenal, but Phar Lap was something else again, often making hacks of his rivals during his extraordinary but tragically short life. Here, in a special postscript, authors Geoff Armstrong and Peter Thompson analyse these two legends of the turf from every angle, identifying what set them apart and setting up the ultimate match race.

Praise for Phar Lap ...
‘Phar Lap is the story of Australia’s most alluring horseracing icon — on a parallel with America’s Seabiscuit.’ — Publishers Weekly

‘Authors Geoff Armstrong and Peter Thompson seem to have answered the mystery of the big chestnut’s death once and for all.’ — The New Zealand Herald

‘If there’s a horse lover about, bet on this to make their day.’ — Inside Sport

‘Anecdote rich and very classy … it is a surprise to find this story of Phar Lap still exciting and much more than a museum piece. A stayer for sure.’ — The Sunday Age

‘Contains all kinds of new and updated information about this legendary Australian champion [including] the answer to the age-old question about the horse’s mysterious death in California.’ — California Thoroughbred
buy PHAR LAP 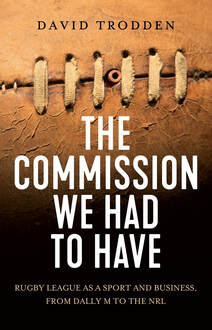 THERE HAVE BEEN FEW more important or revolutionary developments in rugby league history than the establishment of the Australian Rugby League Commission in 2012. A football code that had just celebrated its 100th birthday was entering a new era.

​Much was promised, some of which has been delivered.

Seven years on, and it is a curious thing about rugby league in Australia that while most rugby league fans are aware their game is run by a Commission, very few could tell you the names of the Commissioners or exactly what they do. In The Commission We Had To Have, David Trodden recalls the process that led to the Commission’s formation, lists its objectives, and explains why it could be one of the best things to ever happen to the code.

As a lifetime fan, student of league history, lawyer and prominent administrator who was part of the Australian Rugby League board that voted to create the Commission, Trodden is uniquely placed to analyse the game’s current governance structure. Once predominantly working class, rugby league has become a sporting powerhouse, a producer of heroes from Dally Messenger to Johnathan Thurston, and survivor of courtroom battles, endless controversies and the Super League War. In charting this evolution, Trodden confronts a question now facing those in charge of all major professional sports: is our game a sport or a business, or something in between? The answer has huge implications, not just at the elite level but also for the ‘grassroots’.

The Commission We Had To Have confronts some important issues for league supporters who are wondering what is happening to their game. Are the hopes and dreams of fans and the welfare of players now subservient to the protection of the ‘brand’? Have today’s administrators learned from past court cases involving Dennis Tutty, the ill-fated draft, Super League and Souths?

Where would rugby league be without its current administrative structure? Where might it be heading?

About the Author ...
David Trodden is a former Chairman and life member of Balmain Tigers Rugby League Football Club, and a former Board member and Chairman of Wests Tigers Rugby League Football Club. Trodden holds a Bachelor of Commerce degree from UNSW, a Bachelor of Laws degree from UNSW and a Master of Laws degree (specialising in sports law) from University of Melbourne. In 2010, he was elected to the Board of the NSW Rugby League and the Australian Rugby League, and since August 2013 has been the Chief Executive of the NSW Rugby League. From these positions, Trodden enjoyed a unique ‘insider’s view’ of many of the events that are described in The Commission We Had To Have.
BUY THE COMMISSION WE HAVE TO HAVE